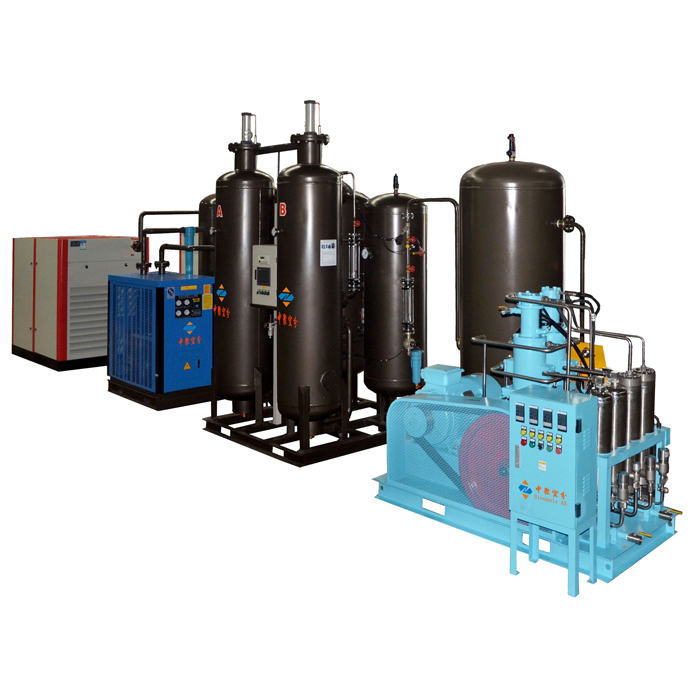 Working principle of PSA pressure swing adsorption oxygen generator The pressure swing adsorption oxygen making machine manufactured by Hangzhou Poly Air Separation Equipment Manufacturing Co.,Ltd  Takes zeolite molecular sieve as adsorbent, USES the principle of pressurized adsorption and depressurization desorption to absorb and release oxygen from the air, so as to separate the automatic equipment of oxygen. Zeolite is a spherical particle absorbent with micropores on the surface and insid...

The pressure swing adsorption oxygen making machine manufactured by Hangzhou Poly Air Separation Equipment Manufacturing Co.,Ltd  Takes zeolite molecular sieve as adsorbent, USES the principle of pressurized adsorption and depressurization desorption to absorb and release oxygen from the air, so as to separate the automatic equipment of oxygen. Zeolite is a spherical particle absorbent with micropores on the surface and inside, which is white. Its pore characteristics enable it to achieve the kinetic separation of oxygen and nitrogen. The separation of oxygen and nitrogen by zeolites is based on the small difference in the kinetic diameters of the two gases. Nitrogen molecules have a faster diffusion rate in the micropores of zeolites, while oxygen molecules have a slower diffusion rate. The diffusion of water and carbon dioxide in compressed air is not much different from that of nitrogen. And what you end up with from the adsorption column is oxygen molecules. Pressure swing adsorption and oxygen production make use of the selective adsorption characteristic of zeolite molecular sieve, and use the cycle cycle of pressure adsorption, decompression and desorption, so that the compressed air enters the adsorption tower alternately to realize air separation, thus producing high purity product oxygen continuously. PSA oxygen making machine adopts high quality zeolite as adsorbent to produce oxygen from air under certain pressure according to the principle of pressure change adsorption. After purifying and drying the compressed air, the adsorption was carried out in the absorber for pressure adsorption, decompression and desorption. Due to the aerodynamic effect, the diffusion rate of nitrogen in the zeolite micropores is much higher than that of oxygen. Nitrogen is preferentially absorbed by zeolite molecular sieve. Oxygen is enriched in the gas phase to form finished oxygen. After decompression to atmospheric pressure, the adsorbent desorption nitrogen and other impurities adsorbed to achieve regeneration. In general, two adsorption towers are set up in the system, one tower is used to adsorb oxygen production, and the other tower is desorbed and regenerated. The opening and closing of pneumatic valve is controlled by PLC program controller, which makes the two towers cycle alternately to realize the purpose of continuous production of high-quality oxygen. The whole system consists of the following parts: compressed air purification module, air storage tank, oxygen and nitrogen separation device, oxygen buffer tank.

1. Compressed air is equipped with air purification drying treatment device, which can clean and dry air, which is conducive to the long-term service life of molecular sieves

2. The new pneumatic stop valve is adopted with fast opening and closing speed, no leakage and long switching life, which can meet the frequent use of pressure swing adsorption process and high reliability

The compressed air provided by the air compressor is first put into the compressed air purification module. The compressed air is first removed most of oil, water and dust by the pipe filter, and then further removed water and oil and dust by the freeze dryer, and then further purified by the super-fine filter followed by the deep purification. According to the system working condition, Chen rui company specially designed a set of compressed air oil remover, which is used to prevent possible trace oil penetration and provide sufficient protection for the molecular sieve. The well-designed air purifier ensures the useful life of the molecular sieve. Clean air treated by this component can be used for instrument air.

The function of air storage tank is to reduce air pulsation and act as a buffer. In this way, the pressure fluctuation of the system can be reduced, and the compressed air can be smoothly passed through the compressed air purification module, so as to fully remove the oil and water impurities and reduce the load of the subsequent PSA oxygen and nitrogen separation device. At the same time, when the adsorption tower is switched to work, it also provides the PSA oxygen and nitrogen separation device with a large amount of compressed air required for rapid pressure boost within a short period of time, which makes the pressure in the adsorption tower rise to the working pressure quickly and ensures the reliable and stable operation of the equipment.

There are A and B adsorption towers with special molecular sieves. When the clean compressed air enters the inlet end of tower A and flows to the outlet end through the molecular sieve, N2 is absorbed by it, and the product oxygen flows out from the outlet end of the adsorption tower. After A period of time, the molecular sieve in A tower is adsorbed and saturated. At this time, tower A stops adsorption automatically, and compressed air flows into tower B for nitrogen absorption and oxygen generation, and the molecular sieve of tower A is regenerated. Regeneration of molecular sieves is achieved by rapidly reducing the adsorption column to atmospheric pressure to remove the adsorbed nitrogen. The two towers were successively adsorbed and regenerated to separate oxygen and nitrogen and continuously output oxygen. The above process is controlled by PLC. When the oxygen purity value is set at the outlet end, the PLC program will open the valve and automatically vent unqualified oxygen to ensure that unqualified oxygen does not flow to the gas point. Use the silencer to make the noise less than 75dBA when the gas is empty. 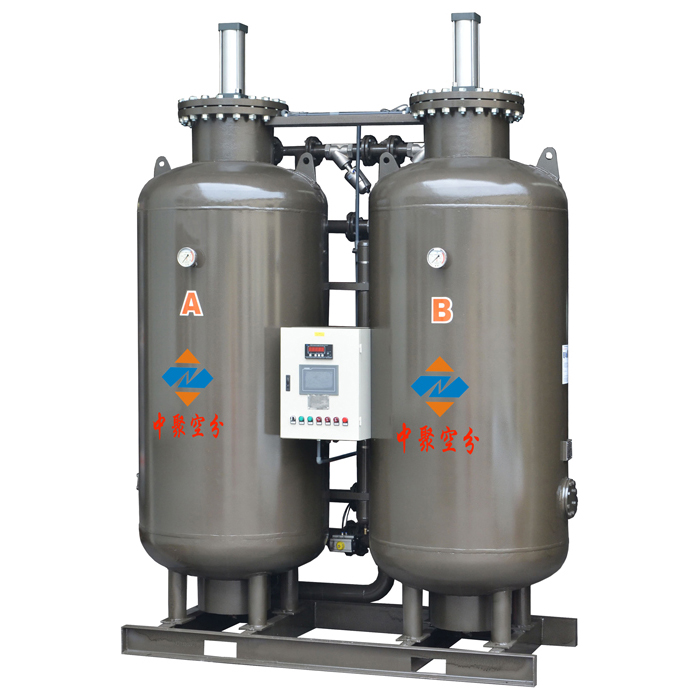